The structure of federal and state law – both statutory and constitutional – empowers corporations to override local democratic decision making. The Community Environmental Legal Defense Fund has assisted the first communities in the United States to eliminate corporate “rights” at the municipal level. 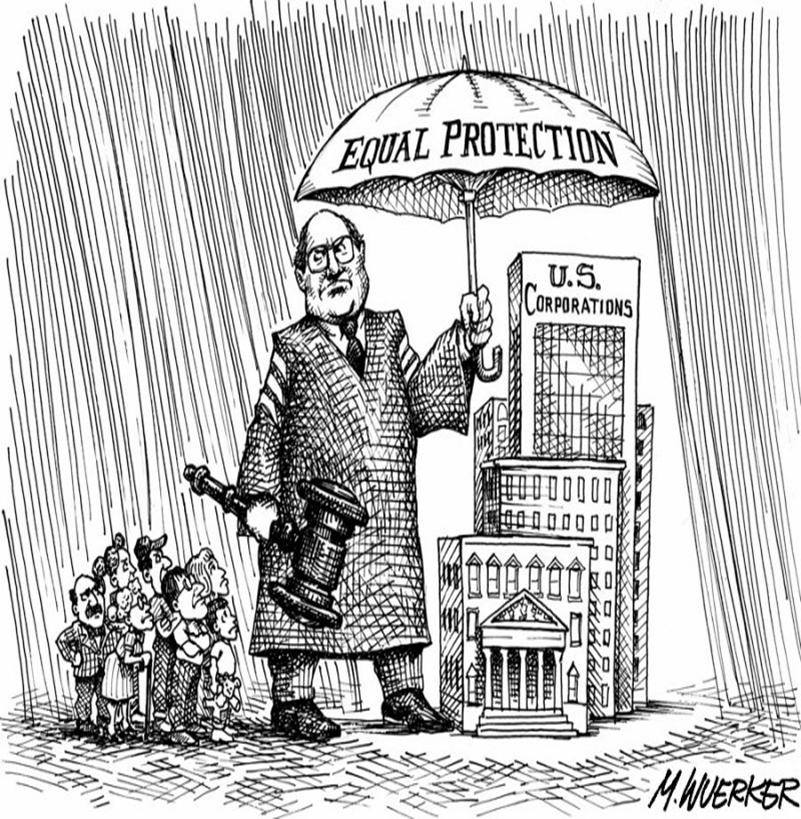 Corporations use these “rights” to challenge state and local laws, and to chill efforts at the local level to fight corporate siting plans.  Thanks to the U.S. Supreme Court’s ruling in the Dartmouth case in 1819, “private” business corporations first gained constitutional protection from government interference in internal governance, ostensibly under the Contract Clause of the Constitution. Curiously, the court found no reason to similarly protect municipal corporations, such as towns, boroughs, cities and counties from state interference with self-government.

As an example, the Waste Management Corporation was able to successfully sue the State of Virginia under the Commerce Clause to overturn a state law that prohibited the importation of out-of-state waste, arguing that the law interfered with the flow of commerce.  With the First Amendment, we see corporations participating in the writing of our laws and the election of candidates at all levels of government.  Citing theFifth Amendment “Takings Clause,” the U.S. Supreme Court ruled in Pennsylvania Coal Co. v. Mahon (1922), that coal corporations must be compensated for property value lost due to laws protecting homes from mining subsidence.  Under the Fourteenth Amendment, corporations are able to claim equal protection and due process rights.

Charters of incorporation seem to grant special privileges for private wealth, including limited liability protections from legal responsibility by individuals benefiting by dint of this corporate shield, along with the “rights” of “personhood” bestowed by the courts. And yet charters do not actually grant rights, but rather they deny rights held by all by identifying corporations as a specially protected class under the law.

“I hope we shall crush in its birth the aristocracy of our monied corporations which dare already to challenge our government to a trial by strength, and bid defiance to the laws of our country.”

In the U.S. Supreme Court’s 2010 decision in Citizens United v. FEC, the Court declared that corporate First Amendment “free speech” rights were violated by federal law which limited corporate spending in elections. Since then, several groups have begun working to propose amendments to the U.S. Constitution to overturn Citizens United.

However, overturning this decision would only return us to “pre-Citizen’s United” days. It would do nothing to address the broad range of rights held by corporations that include much more than just corporate “personhood.”

CELDF calls upon communities, activists, and non-profit organizations to recognize the need to frame the problem far more broadly than just a need to return to the days before Citizens United. As CELDF writes in its statement:

We believe that creating the necessary and desired outcomes requires us to focus not on merely reversing the Supreme Court’s latest expansion of corporate “rights,” but on eliminating the basic (and mostly, unquestioned) authority of corporate minorities to override, and interfere with, democratic decision making by local and state majorities. It is the usurpation of community decision making authority that must be eliminated if we are to have any hope of building truly sustainable and democratic communities.

CELDF’s Model Legal Brief for the Elimination of Corporate “Rights”  Judicial Chronology for the Bestowal of Corporate “Rights”  Corporate Charters Deny Rights to All While Granting Privileges to the Few – Tom PaineCorporations and Natural Rights – Charles Beard  Howard Jay Graham on The “Conspiracy” Theory of the 14th Amendment – From “Evervyman’s Constitution”The Corporate State Ascends: Municipal Corporations Become Its ColoniesThe Fall of Community Self-Government and the Rise of the Corporate StateWhen Corporations Wield the Constitution – Grossman and Morehouse  Toward a Definition of the Corporate State – Daniel Fusfeld  Commerce Clause and Theft of Democracy – Excerpt from Jane Anne Morris’ book “Gaveling Down the Rabble”